It’s the first week of December and the weather still allows summer’s stragglers to hang on whilst the continuing warmth seems to be tricking a few springtime species into an early flowering. And then there are those species which are flowering precisely when they should be!

Fumitories are a group of rather similar species with trumpet-like purple flowers. They are often found along arable margins and in grasslands – these ones were at the unmown edge of a grass lawn on one of my survey sites. 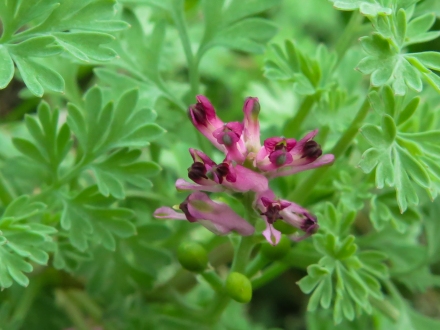 Ox-eye daisy is a species I have seen flowering sporadically in the last few weeks – never in big numbers but just the odd flower in a site where summer would see hundreds. They have normally been seen from a car window so no chance for a safe snap, but this one was more obligingly situated!

Gorse is a winter-flowering species – I looked at the reasons for this in a blog post a couple of years ago which you can see here. The pristine yellow flowers against the glaucous green shrubs are one of the brightest sights to be seen at the moment.

Speedwells are a long-flowering genus, as a general rule, and can often be found through the winter. These little field speedwells (Veronica persicaria) were flowering low in the grassland.

Finally for this week – this cherry tree was flowering in Grantham on my walk into work. There are a number of ornamental cherries which have different flowering phenology so it may be that this one was bred to flower in the winter – however it was the only one in a line of ten which was doing so indicating that it was perhaps more of a miscalculation than a design. I will keep an eye on the other trees over the next few months to see when the rest come into flower! 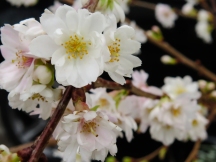